Sutton is one of the leading lustreware potters in the UK. His work is represented in numerous public collections including the V&A Museum, Los Angeles County Museum, the Alhambra Museum in Spain, Fitzwilliam Museum in Cambridge and the Ashmolean Museum in Oxford.

View the work of Sutton Taylor

Born 1943, Sutton established his first pottery in Yorkshire and then moved to cornwall in 1995 where he continues to pot today.

He first exhibtied his lustreware in Leeds in 1976 and has continued producing and experimenting with this notoriously difficult technique ever since.

‘What is Lustreware? In the history of Ceramics Lustreware is defined as `an iridescent metallic surface used in the decoration of ceramics`. It is certainly that – but here it is rather more complicated. Historians believe that the technique of combining precious metals and ceramic glazes first emerged in ancient Egypt when glass – makers attempted to make glass vessels resemble solid metal vessels by coating the surfaces in gold or by incorporating gold into the glass. This may well be the case, for glazed pottery is coated in a film of glass.

The word `lustre` derives from the latin `lustrare` – to illuminate – with connotations of being shining, splendid and brilliant. Throughout history potters have attempted to revive the technique and have often been brilliantly successful – but alas with breathtaking failure rates. Historical records are full of despair – eg: “only one in a hundred is good” – and consequently the successful pieces were highly prized and extremely costly.

I think I do rather better than one in a hundred, but there is a significantly high failure rate. In the world today there are  literally only a handful of potters working successfully in Lustre, although many try and abandon the attempt. Why is this? This is because the technique is capricious and infuriatingly difficult to pull off. Best results happen briefly before the point of destruction, moments before the glazes boil and blister, seconds before the metals volatile and disappear up the chimney and this golden moment must be detected whilst the gases in the kiln are oxygen free. This is made more difficult by the fact that this moment does not always occur at exactly the same temperature and if held too long the lustrous vanish. Too short a time is equally disastrous. Humidity and general weather conditions affect it – so instinct has to be relied upon. After close to forty years of experimentation I continue to be baffled and exasperated by the unpredictability of the technique.

Gold, silver and copper are the chief metals used although these may be modified by cobalt, manganese, nickel, chrome and bismuth. The famous tempting ruby reds of history were made with inclusions of mercury. I manage to avoid this. The potters did not live long. These metals are used on the glaze, in the glaze and under the glaze. The metals are used in the form of soluble salts or increasingly in the form of finely powdered pure metal. A high concentration of metal will produce a film of pure metal, less will make solid colours and less will give transparent colours, opalescence and iridescence.

Why do I persist and continue to be frustrated by the complexities disappointments and high failure rate? It is because when it does work the colours are like no others and one day I will make a colour which has never been seen before’.

View the work of Sutton Taylor 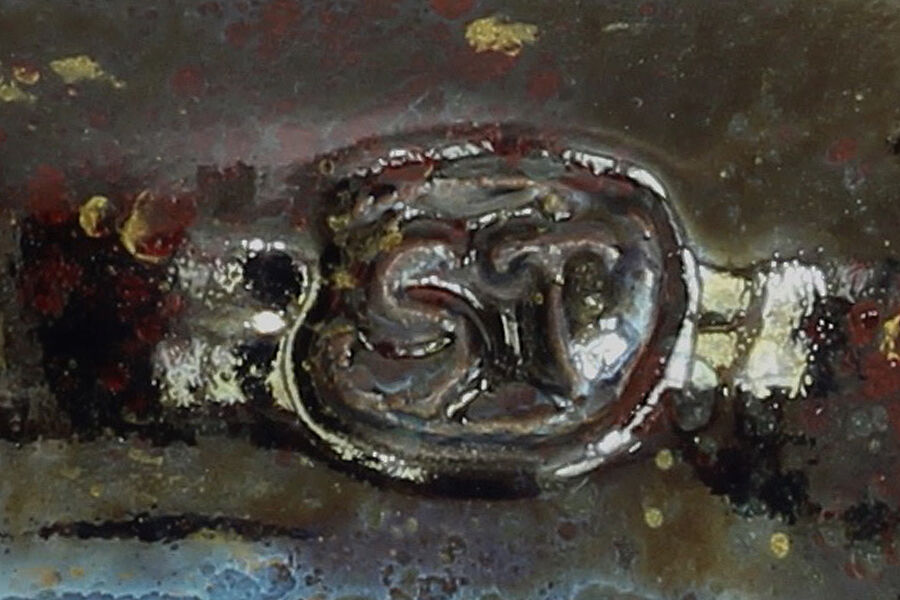