Jin Eui Kim originates from Korea and currently works in Wales. He is committed to his work, being in the studio seven days a week. One piece can take six or seven weeks to complete. The work is visually exciting and plays tricks on your eyes due to the use of tonal bands of colour. Depending on the angle the perception of the work may change yet again.

"My work explores how the perception of three-dimensional ceramic forms can be manipulated by the application of arrangements of bands on their surfaces. Depending on the arrangement of tonal bands, using gradients of width, interval or tone and contrast, illusory spatial phenomena can appear and thus significantly influence the actual three-dimensional forms".

Jin has recently completed a Postgraduate Degree at Cardiff University, but already has an impressive record of acheivement. His work is represented in the National Museum of Wales, Cardiff. 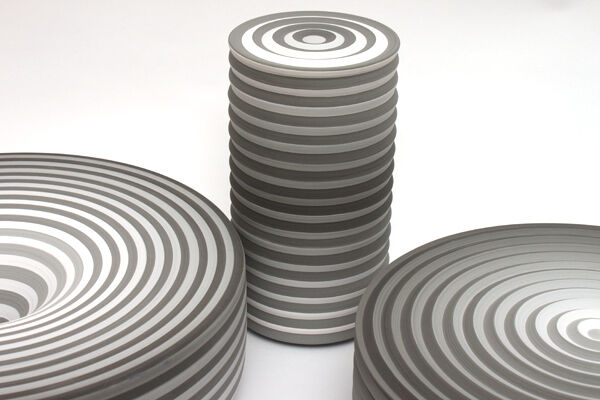