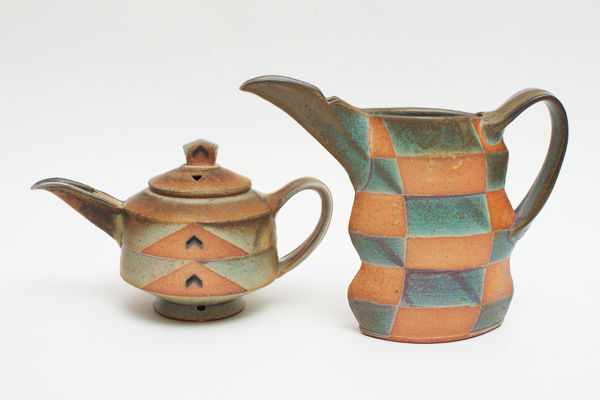 MIAR Arts is very pleased to provide a range of the best recently fired work by Jeff, who lives and pots in Minnesota, USA. The work will be available in the Gallery shortly.

"My interest in soda firing was sparked  by a year of teaching at Alfred University in 1991. Prior to this a majority of my work was wood fired. Feeling restless after a ten year period of wood firing, the soda surface seemed the proper avenue to explore. Jeff Zamik’s MFA thesis was on soda versus salt surface. He did a majority of the pioneering of this technique.

The process of working more intimately with the kiln fit my needs as a potter. Being a lover of the glazed surface as well as the salt/soda presented my initial dilemma. How could I have both? Over a period of time, there  became a balance of both. The question of how glaze and clay surface interface was resolved. The ratio of the two remains a primary issue. This is achieved by waxing out patterns allowing the clay surface to be touched by the soda vapor. Also, the question of marrying an ancient German process with my contemporary visual concerns was an issue. Addressing and honoring this historical method of firing continues to be a challenge. 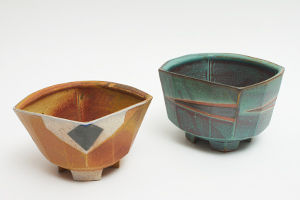 The oval boat form has evolved over a 15 year period. It is thrown and later altered. The fiddlehead fern pattern came from eating small fern heads at a food festival in New York.

What attracts me to the soda surface is that often one side of the piece has an orange peel texture and the other side is more quiet. I enjoy the pot having a record of the firing process. Also, soda can activate the glazed surface and the glaze can shift and slightly run on the rims and sharper edges. The color response seems more brilliant with soda than with salt. In addition to the above, vapors emitted by a soda kiln are less noxious and it is easier working around."

Jeff describes himself as having one foot in Japan, one in Germany with an interest in Art Deco architecture.